Book: The Men They Will Become 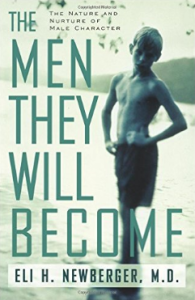 Read Reviews of The Men They Will Become

Strengthening the Characters of Boys: What We Know and Can Do
Presented at the White House Conference on Helping America’s Children
Washington, D.C. on October 27, 2005.
Text
Video

“The Men They Will Become: Strengthening Character in Fathers and Boys”
Keynote Address, National Headstart Institute on Father Involvement: Strengthening the Characters of Boys and Fathers, Dallas, TX, June 15, 2004
Video 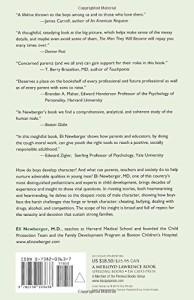 Blurbs for The Men They Will Become

“The Men They Will Become is a lifeline thrown to the boys among us, and to those who love them. Informed by scholarship and lessons learned from his medical practice and his own life, Eli Newberger’s voice is original, compassionate, and trustworthy. For this wounded society, he is the doctor, and his book is the medicine.”
— James Carroll, author of An American Requiem

“This is a helpful representation of the developmental processes which young boys must master. Particularly poignant to me are the stories of adolescents who are not being understood and fully supported by frightened parents who, in turn, cannot see their children’s turmoil for what it is – a search for an identity that is acceptable and contributive. Concerned parents (and we all are) can gain support for their roles in this book.”
— T. Berry Brazelton, M.D., author of Touchpoints

“Eli Newberger powerfully addresses the critical and timely issues of character and character development in boys and men. Through the stories he has collected, and the wisdom he has gained from years of clinical work and research, Dr. Newberger gives voice to the relationships and connections that are essential in creating moral and caring male citizens.”
— Margot Strom, Executive Director, Facing History and Ourselves

“Increasingly, we seem to live in a time ravaged by the destructive acts of young males. In this insightful book, Eli Newberger traces these senseless acts to one significant source, the barren moral landscape in which large numbers of youth grow to an uncertain maturity. Expert in issues of family violence, Dr. Newberger urges the kind of consistent, firm, yet loving guidance youth need from adults to acquire respect for self and others and a strong character. Through examples and excellent commentary, he shows how parents and educators, by doing this tough moral work, can give youth the right tools to reach a positive, socially responsible adulthood.”

“Eli Newberger has written a ground-breaking book that will be of enduring interest to students of education, social work, counseling, and to those who teach them. The question of character development, which is the heart of this book, has received much less attention in recent decades than that given to cognitive development and personality development generally. The need for such attention is daily highlighted by reports of violence in the schools, teen-age suicide, and other tragedies in the life of the young. Dr. Newberger’s book fills this critical need. He manages to combine a comprehensive coverage of the scientific literature with down-to-earth advice to practitioners, and does so in a highly readable style. It deserves a place on the bookshelf of every professional and future professional, as well as of every parent with sons to raise.”

From the Dust Jacket of the Book

How do boys develop character?

What can parents, teachers and society do to nurture admirable qualities in boys and young men?

“Eli Newberger, M.D., one of this country’s most distinguished pediatricians and experts on family development, brings decades of experience and insight to these vital questions. In riveting stories, both heartwarming and heartrending, he shows boys facing the harsh challenges that forge or break character: cheating, bullying, dealing with drugs, alcohol, and competition. The scope of his insight is broad and full of respect for the tenacity and devotion that sustain strong families.

“From birth to late adolescence, The Men They Will Become delves to the deepest roots of male character. A baby boy, says the author, has traits but no character. As he grows, particular characteristics – attachment, honesty, self-control, sportsmanship, generosity, courage – are either nurtured or thwarted. Intrinsic biological drives combine with styles of parenting as well as gender-polarizing forces in the culture to create either the admirable qualities we all admire or those we deplore and fear.

“Rather than looking for flaws and vulnerabilities, or trying to make boys more like girls, Newberger celebrates the differences, the wonderful qualities that make boys boys, and shows us how to nurture and encourage them. As concerns about male character and values enter nearly every discussion about private and public life, this profoundly insightful book offers important and timely guidance. 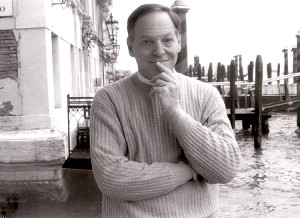 A five-year-old boy in New Hampshire finds that another boy his age has begun to punch him without provocation every time they meet at a local playground. A fifth-grade boy in a Massachusetts public school reports to his teacher that a girl in the class has been cheating on tests. The teacher ignores the evidence and treats the boy coldly. In suburban Boston, a 10th-grade wrestler tells the senior team captain that hazing younger members of the team must stop, and that he is becoming the protector of the younger boys.

These are summaries of a few of the true stories I tell in detail in The Men They Will Become (Perseus, 1999). My purpose is to help parents, teachers, and other caregivers become more competent in guiding their boys toward admirable character. I trust almost all of these adults to be well intentioned, but I believe all of us can enhance our understanding of this fundamental process.

Character, I emphasize, is very different from temperament. Every boy is born with innate temperament that can be influenced and modified to a degree from without, but will basically be his for his whole life. He may be temperamentally calm or restless, shy or gregarious, difficult or easy to soothe, and so forth.

Character is not innate or given. It develops from a continuing interplay between a particular boy’s distinctive wiring and his experiences. Importantly, the principal building blocks of character are laid down early. The way we judge a boy’s character is by assessing the choices he makes in situations that are morally challenging or tempting. Many people are dependable or predictable in their choices of action; they are disposed to act in certain ways. Yet sufficient stress will provoke almost everyone occasionally to act in uncharacteristic ways—and these exceptions are part of their character, too.

Boys make some of their choices in private, but they do not make them free of all influence. Character formation is extremely interactive—between a boy and his parents, siblings, other relatives, peers, teachers, coaches, and others he meets only in passing. Thus, if an adult wishes to influence a boy knowledgeably, it is essential that the adult understand his or her own characteristic ways of interacting with boys. To promote this process, I work from a model created by my wife, Carolyn Moore Newberger, a clinical and developmental psychologist who discovered four different levels of “parental awareness.” Depending on which of these levels an adult exemplifies in a particular situation, a boy’s character formation will be guided in various possible directions. Teachers and other caregivers will find it easy to transpose these types of awareness into non-parental situations. In the stories I recount, the reader will usually find wise and mature adults on the scene where boys are making good choices—and adults with limited understanding where boys are going astray.

Much attention has recently been paid to the influence of peers on each other’s character. Much of this influence, of course, is constructive, but some of it is not. In their quest for independence, many children and adolescents do not see that their peer culture is often nastier than anything they confront at home. Parents, teachers, and coaches do not always exercise the beneficial influence open to them. The situation is not hopeless, however. Adults still have enormous influence on the formation of boys’ character.

As an invitation to adult readers to think deeply about their own characters and their own interactions with boys, I have reported on my upbringing by parents who had their own pressures that handicapped their capacity to be the parents they wanted to be. My story, like everyone’s, is a reassurance that perfection is not the standard so far as character goes. We all have our slips. What is accessible to us is an opportunity to acknowledge our slips, and then to do better. It is the open-endedness of character formation that consoles us all. For until death, there is always something ahead for a male: the man he will become.