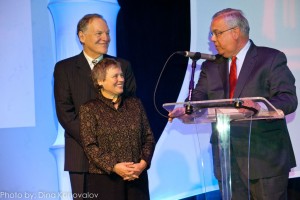 Eli’s contributions have been acknowledged with many honors and awards, including induction into Alpha Omega Alpha medical honorary society; the annual award for improvement of the welfare of children from the Massachusetts Society for the Prevention of Cruelty to Children; the Pantaleoni Award for the outstanding contribution to the betterment and welfare of children, awarded by the greater Boston Committee for UNICEF; the Commissioner’s Award for outstanding contributions in the prevention of child abuse and neglect, awarded by the U.S. Department of Health and Human Services; and the Humanitarian Award of the Massachusetts Psychological Association.

This excellence in the field of child abuse and neglect has been matched by Eli’s musical success playing tuba and piano with the New Black Eagle Jazz Band. Well known to jazz aficionados, the group has played in numerous festivals throughout the U.S. and overseas, and has cut more than 20 records. A rave review of the band in the New York Times hailed Eli as one of the outstanding tuba players in the country.” – American Journal of Orthopsychiatry, Volume 61, Number 2, April, 1991, Dr. Howard Dubowitz