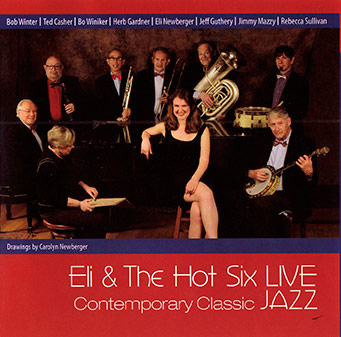 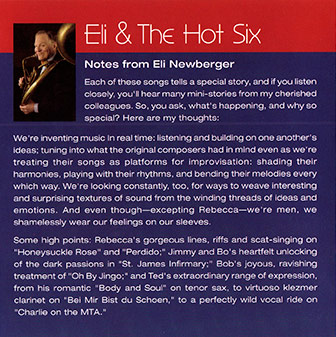 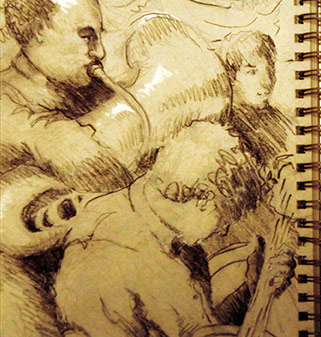 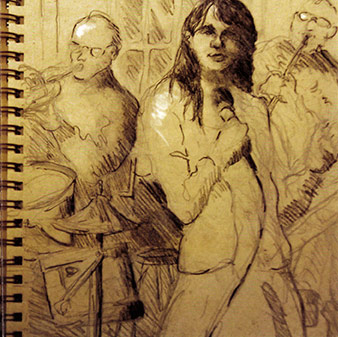 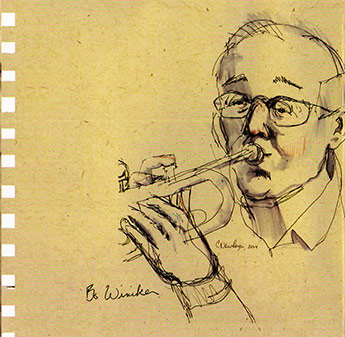 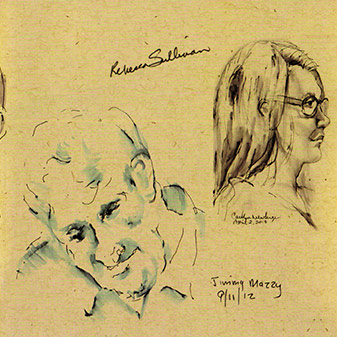 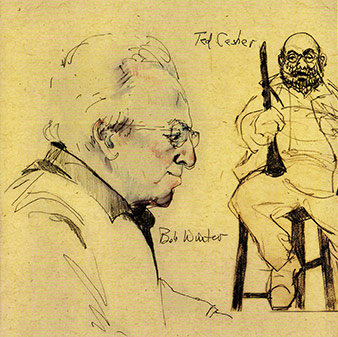 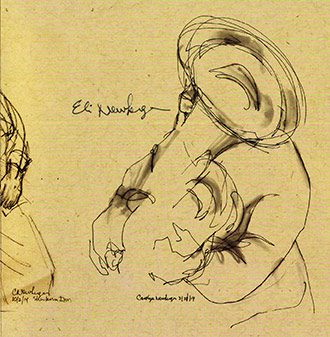 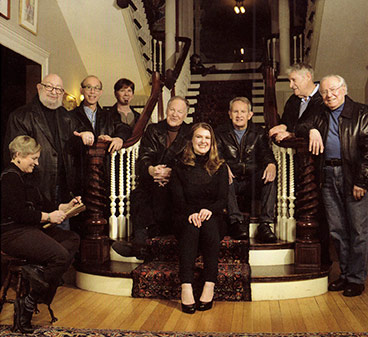 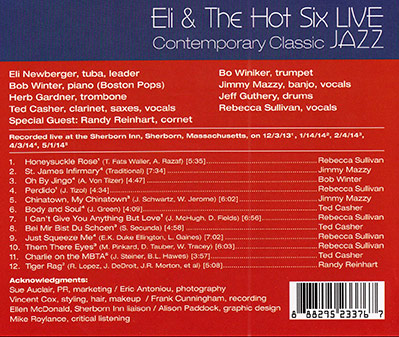 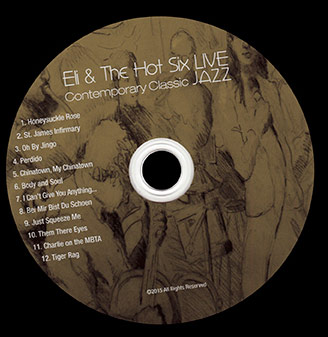 Rebecca Sullivan’s amazing vocal range and rhythmic styling shines through in this band tour de force. After an ensemble lead-in, Bob Winter evoke’s Fats Waller’s original instrumental version, and Rebecca joins him, solo, for a romantic turn. Jimmy Mazzy joins in on banjo with a subtle background reminiscent of Freddie Green in the Basie Band, but with delicious single-string counterpoint. As Ted Casher enters, the swing intensifies, and shortly, as Bo Winiker and Herb Gardner join the party, there’s a sense of everyone’s breathing together, exchanging little ideas and deep emotions, and a growing, expanding vision of the possibilities inherent in the song. As you’ll note all through the recording, when Rebecca focuses in on Herb’s trombone, she gets deep into the contralto range, where with Bo, she extends some 3 octaves up. But it’s not worked; it’s seamless, effortless, all in the service of sublime improvised jazz!

If there was ever any doubt about Jimmy Mazzy’s depth as a blues singer, this song, from its searching beginning to its devastatingly heartfelt ending, will lay it to rest. The instrumental solos build powerfully, even ominously. Bob’s ceremonial chords, summoning a vision of an organ in a cathedral, seems to let out the stops to the breaking point when Eli joins him for a four-handed, climatic crescendo. This stirs the band to new heights of passion, with Bo wailing as he’s never wailed before. Jimmy takes it out in a reprise of the beginning, offering a spontaneous, spine-tingling coda accompanied by a heavenly, spiritual band response, summoning “Joshua Fit the Battle of Jericho.”

Bob Winter’s delightful treatment of Albert Von Tilzer’s 1919 Tin Pan Alley hit displays his powerhouse left hand. Could this be propelled one wonders, by the father of Harlem stride, James P. Johnson? Or are the many 4/4 left hand backgrounds inspired by Errol Garner? With Bob, the scholar and Berklee professor, there are myriad influences, but he bears an integrated, keenly personal style, always driven by unfolding ideas, a secure beat, and fascinating voicings and harmonic substitutions. Especially toward the end, Bob brings to bear a virtuosic two-fisted improvisation extending across the keyboard with colors and dazzling traversals across the keyboard. Did Johnson’s student, Art Tatum, overtake Bob’s consciousness? No, for sure, this is the distinctive Bob Winter wit, wisdom, and deep comprehension of the entire arc of jazz piano improvisation, summoned from an unparalleled palette of expressive tools.

Note Bob’s understated sense of humor, too, with dramatic shifts in which hand carries the melody, an astounding sudden pause that ushers in the last stanza, an a sublimely silly next-to-last note that almost sounds like a mistake. Until a tiny pause and shattering chord. One can’t but wonder whether Bob was recalling Lew Brown’s lyrics to “Oh By Jingo,” which gave rise to more than a decade’s worth of absurd, exotic songs in nonexistent tongues and places.

Ted Casher’s eloquent solo tenor sax builds a rhythmic foundation for this splendid song written by Juan Tizol, a trombonist in the Ellington band. Here, without rehearsal, Rebecca jumps in almost as an instrumental voice, extending chorus after chorus of melodic variations, counter-rhythms, and little conversations with clarinet, trumpet, and trombone. One can hear why Bob and the horn players, steeped in this music and, indeed, knowing the passing harmonies and final ensemble riffs like the backs of their hands, love her so much. Rebecca’s sense of style, and delight in this unfolding drama — totally unrehearsed and never-before performed with the band. She has reason to giggle at the end!

Jimmy Mazzy sings it in solo, accompanied only by his banjo, as in St. James Infirmary. But is the mood ever different! The song begins quietly, even romantically, with sweet memories, and expands and expands to Jeff Guthery’s terrific drum solo, a tuba solo that rises and rises through whirling phrases to a sudden two-octave rip up to middle C, and Bob’s two rocketing choruses, the second provoking an epidemic of off-beat hand-clapping. Chinatown is thus equally remembered for the raucous, touristic good-times celebrated in the Turk Murphy Dixieland revival. But this is 4/4, not oom-pah, oom-pah, and not one but three 4-bar tags, on drums, banjo, and piano, carry it to a smashing end, with Bob’s eerie fourths, fifths and curious pineapple chord adding just the right touch of Orientalism.

7. I Can’t Give You Anything But Love

Here, Bob Winter offers an excursion across the history of jazz, while Rebecca Sullivan evokes the sentiments of emotional wealth in a landscape of conversations with the guys in the band, even laughing at one game improvisational effort. So delightful are those exchanges that an attempt is made by the tuba to imitate Jeff’s drum licks in a particular chorus of trades. Neither does this work perfectly, except insofar as the message, and the legacy, of the “I Can’t Give You Anything But Love” is a struggle against underlying imperfection. This is also what jazz is about, and isn’t about. It’s honest expression of ideas and feelings, risk-taking, and ought never to be just a display of technical wizardry.

Oy, does Ted Casher lay this one out, or what? In vintage Casher form, he begins the verse with a conundrum. What do you think? Is he saying “Of all the goils I’ve know, and I’ve known some,” or “Of all the goys I’ve known, and I’ve known some?” With Ted, it could be either, or possibly, both? Unlike the Andrews Sisters’, Ted’s version of the swing classic is replete with memories of growing up in Skowhegan, Maine, speaking Yiddish. Not only does Ted sing with gusto and bravado, when he grabs his clarinet, he instantly produces another show: astounding, up-and-down spirals of Klezmer, which he speaks as if it, too were his first language.

9. Just Squeeze Me (But Please Don’t Tease Me)

It was Rebecca’s mentioning this song as one of her favorites that led to her invitation to sit in on a quartet gig with Bob, Jimmy, Ted, and Eli, performing as the Jazz Tuber Quartet at the Sherborn Inn. Subsequently, a steady gig was offered on the first Thursday of the month, and riding together with Bob and Eli, her song list grew even as Bo and Herb joined the band and we started this recording project. Here, Bob is once again, in a kind of didactic form, as always with delicious truth on his side. He speaks Ellington like Ted Casher speaks Klezmer. Rebecca’s own sincerity and appreciation of both the tradition and these (gulp, older) players is expressed with an imitable, ingenuous, youthful sweetness.

Here, a more rapid and complex song of allure pushes the band to more exotic improvisatory terrain. Hearing the banjo in Jimmy’s hands work through the shifting changes is a kind of revelation, where Rebecca’s growing intensity, through splendid, scalloping tags at the end. Somehow, Bud Powell found his way into Eli’s tuba, emerging in a curly bop-inspired improvisation over 3 octaves.

Boston’s rattletrap public transportation system has been put to test in the winter of this CD’s production, and our new Massachusetts governor is called “Charlie.” He’s a Republican. Surely, some kind of dedication is certainly in order, although it might contradict with Ted’s call to Democratic Boston voters: “Fight the fare increase, vote for Tommy Menino, and get Charlie off the MTA.” The band performed this song on May 1, 2014, as a musical keepsake for Rebecca who received her M.M. degree from New England Conservatory and moved to New York shortly afterward. Now, hopefully, she’ll recall even more favorably our good times at the Sherborn Inn.

Randy Reinhart, the brilliant New York cornetist, drove from New York to Boston to fill in for Bo Winiker on January 14, 2014.

Leaning more, perhaps, to the legacy of Spike Jones than to the New Orleans ensembles who put this rag together, this version of one of the most frequently recorded jazz standards features instrumental virtuosity, boffo humor, and a keen sense of ensemble collaboration.

Note, for example, Ted’s klezmer clarinet inflections and pop song quotations, the confusion, graciously resolved, between Bob and Jeff on whose solo it was, Jeff’s brilliant, silent drum break in vivid contrast to the nonsense that went before, the split-second realization by Ted, Randy, and Herb that Bob was going to continue after his solo break in the following chorus, and how Randy — all the while completing a virtuosic improvisation — signals in jazz sign-language that the band should modulate to B flat for the following, final chorus. (Two fingers down signify two flats, the key signature of B flat major. Such a last-minute key change adds surprise and intensity to the mix. It can be overdone.)

Of course, there’s an abundance — overdoing, for sure! — of tiger evocations, although Herb’s growling trombone suggests more a sweetly purring kitten than Eli’s rampaging beast. Over-the-top humor is a vital element in this beloved jazz tradition, and were we ever having a ball!