Tuba in hand, acclaimed physician delights in his first passion 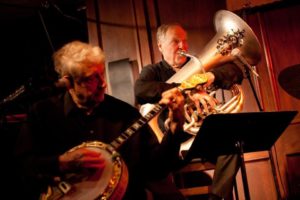 Dr. Eli Newberger performing on tuba with his band Eli & the Hot Six at a recent show at Scullers Jazz Club

On a recent night, Scullers Jazz Club in Cambridge was packed with nationally renowned experts on trauma and child abuse, former Peace Corps volunteers in West Africa, and book group buddies. They were all there to honor Dr. Eli Newberger, who sat in perhaps his favorite spot on earth: on stage, cradling his beloved tuba.

Newberger, who is both a nationally renowned child abuse expert and a fixture on Boston’s music scene, was turning 75 on Dec. 26. Scullers had to add a 10 p.m. show, after an earlier session, to accommodate fans of his medicine and his music.

“This is a birthday party of music,” he told the enthusiastic crowd before his group, Eli & the Hot Six, launched into an all-Gershwin gig. As he kicked off “It Ain’t Necessarily So,” he told the crowd: “The amygdala in the brain is the center for our cessation of stress. It sets off a cascade of hormones and messages. This is also where music enters our brain.”