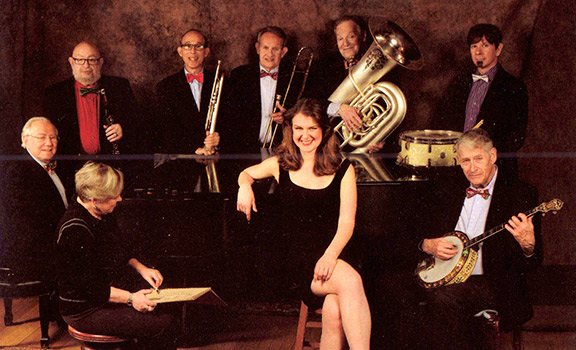 Jazz tuba virtuoso Dr. Eli Newberger experienced his jazz epiphany in the sixth grade when the excellent Davis Dixie Band (of A.B. Davis High School in Mount Vernon, New York) played at his elementary school. Shortly thereafter, the school band director placed the tuba in his hands – with the ulterior motive of developing talent for the Davis High School football band. (“You don’t find the tuba, the tuba finds you,” says Eli.)

While in the eighth grade, Eli heard Louis Armstrong and his All Stars at a benefit concert, and his love of jazz was confirmed. He went on to play with the Davis Dixie Band, whose well-rehearsed heat and precision may be seen in the above 1960 clip from the Ted Mack Original Amateur Hour. Eli’s brother Henry led on trombone by that time, but Eli rejoined as an alumnus of the group for the contest. The young band plays with fiery snap.

Eli loved the tuba, but his father (mindful of his own travails during the Depression) insisted he study organ “because you’ll always have work.” Eli studied organ, along with the required courses of piano and theory at Juilliard (continuing tuba studies with New York Philharmonic tubist William Bell). After high school, he continued his theory training at Yale, but took on a second major in premedical studies, graduating from Yale Medical School in 1966.

Even while hot jazz beckoned, Eli played tuba with the New Haven Symphony from 1958 until 1966. While playing with the Tin Rainbow Jazz Band (a Yale group led by clarinetist Fred Starr), Eli met his wife Carolyn. After his first year in medical school, the couple became resident directors of Yale’s International House. The International Feetwarmers, a jazz group playing in the basement coffee house, was the first incarnation of the group eventually to become the New Black Eagle Jazz Band. 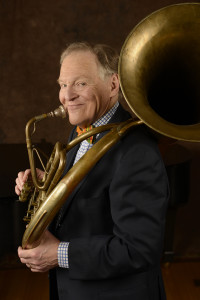 During his two years in the Peace Corps in Upper Volta (now Burkina Faso), friends wrote Eli that the Yale group had continued on as the Galvanized Washboard Band with Tommy Sancton on clarinet. When the Newbergers returned to the states, and Eli began his residency at Boston Children’s Hospital, he discovered there was little traditional jazz played in that city. But Tommy Sancton, now at Harvard, had grown tired of commuting from Cambridge to New Haven to perform with the Galvanized group and was looking to play closer to home. Adding British trumpeter Tony Pringle to Sancton’s clarinet and Eli’s piano became the basis for the Black Eagle Jazz Band in 1970.

After some reorganization (during which Bob Pilsbury took over on piano), the group reformed as the now-venerable New Black Eagle Jazz Band in 1971. Eli played tuba with the band for the next three decades. He left the group in 2001 because, as he says, “it was time.” While performing and traveling with the New Black Eagles, he simultaneously maintained a busy practice in pediatric medicine. The band’s non-stop performance schedule provided wearisome to the Newbergers. “I promised Carolyn I wouldn’t play any more than three nights a week,” says Eli.

Since 2001, Eli Newberger has still managed to get out and play plenty of hot jazz. He performs frequently with his old friend, banjoist Jimmy Mazzy. (Eli, Jimmy, and clarinetist Ted Casher comprise the Jazz Tuber Trio.) Eli revisited his classical roots in 2007, premiering Howard Frazin’s Theme and Reverberations for Two Tubas and Orchestra (also featuring Boston Symphony tubist Mike Roylance). With Roylance, he has also performed Tubby the Tuba and other works for children with their Cupcake Philharmonic Orchestra.

Lately, Eli’s main musical focus has been improvising with his All Stars and Hot Six at the Sherborn Inn in Sherborn, Massachusetts. He is excited about the band’s new album, Eli & The Hot Six LIVE: Contemporary Classic Jazz. The group, which has played for some time under the name Eli’s All Stars, became the Hot Six with the addition of vocalist Rebecca Sullivan for the current CD. (Eli’s wife Carolyn, a gifted artist, has supplied delightful illustrations for the accompanying booklet.)

Eli discovered Rebecca Sullivan while mentoring her in the Contemporary Improvisation program (formerly known as Third Stream) at the New England Conservatory of Music. Rebecca confessed her love of jazz balladry, and it wasn’t long before she was sitting in with Eli’s All Stars. She made an immediate hit with the musicians, working within the group’s seamless improvisations with an intuition bordering on telepathic.

The Hot Six doesn’t even rely on what musicians call “head arrangements.” Each performance is unique and never to be repeated – yet the rollicking jazz on the group’s new disc bears repeated listening and withstands fussy critical analysis. Despite playing jazz for the sheer love of the music, each musician in the band is an undisputed master of his instrument – and each is a collaborative composer and arranger, working on the bandstand in real time.

Bob Winter’s pianistic contributions remind one instantly of the early masters of Harlem stride, but with overtones of Tatum and Garner. The wit and subtlety with which he plays, and his uncanny knack of stretching and snapping tempo like a rubber band, are all his own. Bob has been professor of piano at the Berklee College of Music since 1972, and pianist with the Boston Pops and Boston Esplanade Orchestras since 1980. He swings so hard that one might forget to look at his credentials.

Reedman Ted Casher is also a Berklee alum and teacher, and remains one of the busiest clarinet and sax players on the East Coast. He injects a note of humor into the band’s recording of Bei Mir Bist Du Schoen with his raucous vocal and klezmerizing clarinet. New England Conservatory-trained Bo Winiker (originally called “Bo Bo” until the late Gunther Schuller told him that halving his nickname would double his chances of success) plays his horn with more than requisite heat on St. James Infirmary following a plaintive vocal by banjo legend (and favorite Eli Newberger accompanist) Jimmy Mazzy. Veteran trombonist Herb Gardner (who has worked with all the major figures of classic jazz over the past 50 years) and drummer Jeff Guthery round out the Hot Six sidemen.

Eli’s background in classics and theory enable him to bring considerable critical acumen to the engaging, scholarly reviews he writes for the Berkshire Edge, a new online newspaper. But music for Eli Newberger has never been about ivory-tower elitism. Eli and Carolyn Newberger played a key role in creating Kids 4 Harmony (a Berkshire County program based on the well-known El Sistema of Venezuela) which provides children from lower income families with over two hours of after-school music instruction per day.

Jazz, to Eli Newberger, is also about giving back: “We’re missionaries. In performing jazz you experience the joy of giving, which is the joy of attracting people to music.” With the excellent music made by Eli and his Hot Six, there is plenty of joy to go around.